“Courteous, friendly, honest, and timely, sums up our experience with Olson’s Sewer Service. Second to none!”
-Tom and Rhonda R., North Oaks 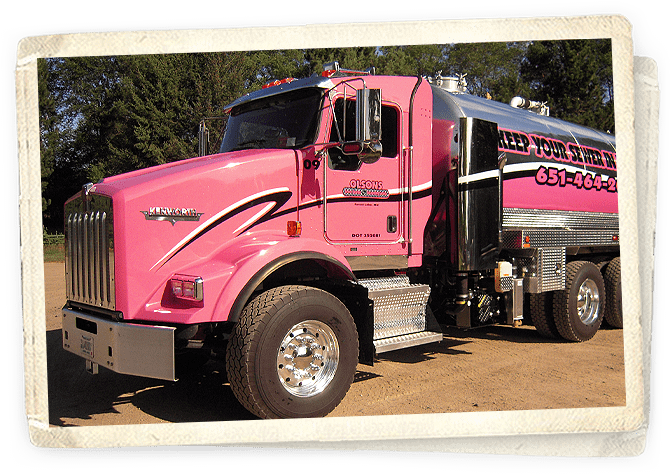 I was worried about the health of my septic system because I had neglected it for a while, so I called Olson’s Sewer Service – you know, the guys in the pink trucks. I was hoping the serviceman would be friendly and helpful because I know nothing about septic systems. I couldn’t have been more pleased. Dave showed up in his pink truck and immediately put me at ease. He pointed out a potential problem in the tank which he fixed, then he recommended a bit of maintenance to keep tree roots out of the tank. He pumped the tank then figured out the bill and to my delight it was less than the estimate I had received. All of the Olson’s people – from those on the phone, to Dave in the truck – were a pleasure to work with. I highly recommend their service and know they will be keeping my system “in the pink” from now on.
-Greg from Lino Lakes

I called Olson’s at 11:00 at night because I had concerns about one of my tanks being too full. The on-call person discussed the situation with me, determined that this was not an emergency and scheduled me for an appointment for 8:00 a.m. the next day. Olson’s technician showed up on time, vacuumed out my tank and identified the problem. Since this was a warranty issue, the technician suggested contacting the original installer first, but noted that if that didn’t work out to my satisfaction, Olson’s could take care of the needed repair. When I mistakenly overpaid the technician, he came back from his truck and gave me back the extra money. Olson’s took care of me and did everything that I was promised. It’s hard to find that kind of service these days.
-Jacob G., Hugo

PMI Homes, Inc. has employed Olson’s Sewer Service and Excavating Services for over 20 years, taking care of all our sewer services and excavating services. Many of our projects are extremely demanding when it comes to knowledgeable and professional contractors and the crew at Olson’s have exceeded our expectations in exhibiting the ability to perform at a level unparalleled to others in their field of work. Olson’s Sewer Service and Excavating Services are in a league of their own, providing uncompromised workmanship. There is no such thing as “cutting corners” with this company. All employees handle themselves with the utmost professionalism and timeliness that has been exhibited from the first day they started working with us up to the projects they are currently performing for us today. Many thanks to the crew at Olson’s for providing such a high level of quality workmanship to PMI Homes!
Mike K. pmihomesinc.com

I had a dozen or so trees cut down and needed the area that formerly contained the trees, graded and readied for seeding a lawn. I also had a large hill that I wanted to visually soften by making it a much more gradual incline. I called Olson’s and spoke with Dale, was impressed with his professionalism and set up an appointment for him to come out and look at the job. A little before the project was to begin, Dale stopped out at the site with a co-worker to survey the project. The co-worker suggested using sand for the majority of the fill/grading and then use black dirt on top of the sand to facilitate the seeding of the lawn. They mentioned that this would likely reduce the cost. The work turned out exactly as I wanted and the end invoice was less than the original quote. It is rare to encounter a company with the integrity and character demonstrated to me by Olson’s Sewer Service and Excavating Services, so they have my absolute recommendation and they won me over as a customer.
Brian K.- Lino Lakes